Requiem for the Bad Guys

Memorial services are now in progress...

This page was last updated February 2011 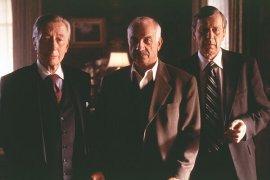 They lived in shadows, they traded in secrets and lives, and they poured all of their wealth and time into achieving one goal: survival. It is an ironic twist of fate that they should have been the first victims of alien invasion, which, as we all know, is inevitable.

Great men, they operated outside the law, making sacrifices and choices unimaginable to us, mere mortals, on an everyday basis. How much does one human life cost? How much for six billion? One must admire men who operated with these stocks and bonds on a regular basis. NYSE is less challenging.

Allow me to finish by saying that while we've always had a threat of alien colonization on the X-Files, now we have no buffer against it. And remember... we all know a dirty little secret. The great man, Agent Fox Mulder, was going to join them all.

Goodbye, our friends. Rest in peace. May afterlife be more comfortable to you than the anticipation of terrible fate was in this reality.

Some Words from Friends of the Departed:

When I was first introduced to that ragtag group of old men who we came to know as the syndicate, the consortium...the evil old white guys who sat in a room and smoked, I didn't think much of them. After all, they ruled over CSM - which confused everyone.
However, through time they became part of the X-Files family...the evil that lurked behind every corner, the men who plotted to destroy without remorse. They were the worst aspects of human nature personified -- and we adored them for it.
They allowed us to create a new section of fanfic -- put Mulder and Scully in an entirely different light with much different rules.
Alas, Chris Carter and his lust for blood has overtaken that which we thought would never be destroyed. We salute you Consortium members for making the X-File world an incredibly dangerous place for at least five seasons. Rest in peace and we hope that you come back as philosophical dead guys.


The gods themselves throw incense.

We are gathered here today to mourn the untimely passing of a group of men (and their innocent families) who were faced with the hardest decision mankind has ever known. They may not have always been the kindest, or the most humane, or even the brightest, but they put in a good effort to save humanity from alien invasion. You can't blame them for trying...
We also mourn the passing of Jeffrey Frank Spender, beloved (or not) son of Cassandra Spender and C.G.B. Spender, who escaped the Great Consortium BBQ only to meet a rather suspicious death in the basement office of the X-Files. Hey, we know he's not REALLY dead, but...we'll mourn him until his resurrection in May.
In the meantime, C.G.B., if you're listening, I know a few people who would be willing to fill in those empty seats in the highrise on 46th St. East.

Some say the world will end in fire,
Some say in ice.
From what I've tasted of desire
I hold with those who favor fire.
But if it had to perish twice,
I think I know enough of hate
To know that for destruction ice
Is also great
And would suffice.

When faced with the certainty of destruction, they make their choice. The world will end in a slow, lingering frost. In colonization, and the human race will linger, numb and lifeless. A mockery of survival, but they cannot bear to face annihilation. It is surrender, and there is only one betrayal left: one death for another -- ice for fire. Quick and agonising, the martyr's choice is thrust upon them. And so they die in flames, a hero's ballad, in spite of themselves.

Evil is indeed banal. The iceworms, the glowing nits, the silicon fungus, the flukeman, all followed their nature, unable to be, or to conceive themselves, other than as they were. Without choice, there is no evil. Human monsters can be evil, yet many even of these partake of the innocence of a disease germ. A madman may be a danger, may need to be locked away, restrained from harming others, yet if truly mad has that same inability to concieve himself other than as he is.

The true banality of evil is the medically sane, legally competent men, average-looking men, who meet together to save themselves at the expense of everyone else. Who declare all but themselves to be expendable cattle, lab rats or incubators at need. Who weep crocodile tears at what they cost their own families and wave aside the cost to their victims and their victims' families. Who declare the survival of their small group to be the "Big Picture" for whom all those dozens? scores? hundreds? of victims are an unfortunate but necessary price.

On the day when our soldiers took their stand,
taking with them their life, their love;
A voice inside said "this, my friend, is my
wish that you defend our shores till death of fire comes."

So, take this hand, it is broken, crippled
for you, your life to protect, Every time that you look,
a Memorial you'll see, for unto us, you gave your all.

So, take this hand, it has been shattered,
broken for you, your life to protect,
Every time that you see it, a Memorial you'll see,
for unto us, you gave your all.

To each and every person of the group
that gave of themselves during time of purification,
I dedicate this to you,
for you truly have given your all, for each of us.

"Chris Carter said that only two major characters were going die in "One Son". Either he can't count or he doesn't considered the members of the Consortium to be "major characters." If the latter is true, he ought to be ashamed of himself. I can't say I understand their sacrifices or that I don't question their motives, but their intention was always good. They devoted their lifes to saving the human race and if humanity does survive colonization, we have them to thank for it. It's a shame they won't ever see their dream achieved, but their work will live on. I eagerly look forward to the day when Mulder and Scully finally finish what they begun. In the meantime, we'll remember the great sacrifices these men made and hope that their deaths will not be in vain.

Much has been said, about the Consortium in general,
That they were foolish, and brave, their looks sometimes absymal.

They died in the great barbeque of nineteen ninety nine,
For their sacrifice, their ashes we'll bury... will it be in oak, or in pine?

They died with noblest of intentions -- saving the world from colonization.
Alas, the flame throwers came. They were fried, as were their relations.

We must also commemorate Jeff Spender -- his life dreadfully cut short,
Shot by C. G. B. Spender, an author wannabe, and a Syndicate cohort.

So, a fateful event, one Sunday night, that has left many of us reeling.
Good bye faceless shadows. Hopefully, someday, someone will be able to give your sacrifice some meaning.

Take Me To Your Leader

The X-Files belongs to Chris Carter, 1013 Productions, and Fox. No copyright infringement is intended, no monetary profit is made.